Finding Joy in Helping Others 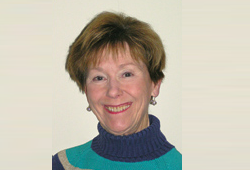 About five years ago, Maureen Conley experienced a difficult life event. Rather than dwell on "why me?" indefinitely,however, she consulted a therapist, reevaluated her life, and reconsidered her values.

One of the steps she took as a result was to designate the Wisconsin Province of the Society of Jesus as the beneficiary of an Individual Retirement Account (IRA), to support the Native American missions. Here, she shares some thoughts about the decision.

Q What inspired you to offer this gift to the Jesuits?

A Although the actual gift designation is new – I made it part of my will a few years back – I can trace its beginnings to about 45 years ago, when I worked at Fusz Memorial, a Jesuit community at St. Louis University. That job brought me in contact with numerous Jesuits — priests, brothers and seminarians. Over the years, I kept in touch with several of the men. With two in particular, Fr. Eugene Merz, SJ, and Fr. John Schwantes, SJ, the correspondence continues.

Five years ago, when it seemed like my life was falling apart, in my annual Christmas card I wrote John Schwantes and Gene Merz about all that had happened. Their support continues to help me, and the occasional emails and letters have deepened our relationship.

One particular letter from John really touched me. He told me how he used my story with retreatants at the Jesuit Retreat House in Oshkosh, Wis. That revelation — how we can be connected to others without knowing them — was just one of many discoveries I made during this time.

Another revelation was how meaningless so many "things" are, which made me want to do something that could live on in a way that wouldn't fade. I, of course, feel that way about my children and grandchildren – but because my children are fortunately doing fine financially, I wanted to consider the needs of people beyond my own family.

Q There are many good causes; why are the Jesuits worthy recipients of your gift?

A I'm very cautious with my money. I want it to be used well. Before giving any donation, I check out the organization on Charity Navigator. For example, I feel that some nonprofits spend way too much money on advertising. But I trust the Jesuits will use my gift wisely.

Q Why did you designate your gift for the Native American missions?

A I have always had a soft place in my heart for Native American peoples. I believe they were dealt a huge injustice historically, and remain the silent downtrodden. But the Jesuits of the Wisconsin Province have been there for them, while respecting their culture.

I also believe strongly in the power of education – because that's how I think people who are disadvantaged can overcome the cycle of poverty and make a better life for themselves. In this way, too, the Jesuits are leaders.

Q There are many ways to give — such as cash, real estate, a planned gift in a will and more. Why did you choose your approach?

A For one thing, it made sense from a financial standpoint – as the Jesuits will not have to pay taxes on the proceeds of the IRA. In addition, although this was the first way I chose to support the Province, I do also now give an annual gift – partly in support of the elder Jesuits, and partly toward the Native American missions.

Q Do you have any additional thoughts to share with our readers?